Here is the Wiki page where Sam Churchill will assemble a page on Austin Wireless Parks. 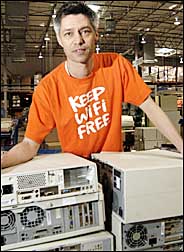 In Austin, you can pick up some rays just about anywhere these days  2.4 gigahertz radio waves, that is. This central Texas city has become something of a hot spot for hot spots, with hundreds available in businesses, restaurants and parks. In many of them, anybody with a Wi-Fi-equipped laptop can turn on and tune in at no charge.

"Austin is the freest unwired city in the world," Mr. MacKinnon said, sitting in BookPeople, a large bookstore, with a fellow project leader, Jon Lebkowsky, a technology consultant. "It's like a road  the best way for a community to flourish is if the roads are free. The quickest way to squelch it is to charge for access."

Austin already had hundreds of volunteer hot spots (not even counting home users who share their networks), but Mr. MacKinnon is trying to push the idea further still with the Austin Wireless City Project. He is evangelizing for a movement that blends free wireless, free software and even free computers into a growing citywide network. The movement rebels against the practice of charging for hot spot surfing the way Starbucks and other businesses do.

So seven months ago, Mr. MacKinnon and like-minded geekerati started their project. The premise: they would install a Wi-Fi hot spot  free  in any business that had a high-speed Internet connection. They use recycled computers donated by a local company, Image Microsystems, to give the project a green halo: "By saving the environment, we also found a cost-effective (free!) way to put hot spot servers in our venues," Mr. MacKinnon wrote in an e-mail message.

They also keep costs down by loading the machines with free software like the Linux operating system and other programs that they developed to enhance the network for users. Anyone who is connected through the network can see who else is logged on and send Web-based e-mail or chat live with them, wherever they might be in town.

In the seven months that Austin Wireless City has been around, the group of about 30 volunteers has installed about 40 hot spots. It has signed up 7,200 users, Mr. MacKinnon said  far more than T-Mobile and Starbucks locally, according to an analysis in Wi-Fi Networking News, and growing at a rate of about 30 percent every two weeks.

This month, Parks and Recreation Department of Austin, Texas, will begin offering free wireless Internet access in selected downtown parks. Four parks have been identified for immediate service. First up is Republic Square, The Austin Telecommunications Commission, coordinates the program which is being operated by the city in conjunction with several public and private organizations. Supporters include Schlotzsky's, the Downtown Austin Alliance, the Austin Wireless City Project, and Austin Energy.