Man has walked on the Moon, discovered new life in the Ocean's depths, decoded the human genome and tampered with the fundamental nature of Earth. Technology has explored places never imagined, created breakthoughs in every frontier, expanded every discipline. Except Art.

We can make the human experience better, deeper, more connected, more meaningful. We have the technology. We have the skills.

Technology is art. We could create a space. With El Wire and ArtBots (is that too passe? The workshop would explore new frontiers in public interaction. It would develop projects that have broad public applications.

Research funding is usually limited to academic or corporations, but non-academic research, open to everyone, requires a paradigm shift. Defining a project that would be fun, useful and broadly applicable would be the first step.

Some sort of public interaction might involve wireless LANs. Maybe a Blue Man Project performance instrument, a float, a talking kiosk, or an interactive sculpture. It might be funded by Murdock, Intel Foundation, HP or other organization to the tune of, say, $20,000 over 2 years.

A small research loft/lab might rent for $300/month and include computers, wireless networking, sensors and construction materials. It would be located for easy accessability and creative cross fertilization. It could eventually do contract work for architects, artists and designers.

An Internet Street Fair might be a good place to start with interactive sculptures and information kiosks. Here are some ideas related to community art projects. Maybe put Wi-Fi under the wing of the City Repair Winged Truck . They drive to different neighborhoods every Monday in the summer.

I think prototyping in cardboard with a bill of materials under $20 would be a good start. Computer control optional at extra cost.

Imagine something never imagined. Add social/political context. Imagine walking into a room and seeing hundreds of objects floating in space. See your image in VR space, interacting and mutating. Imagine what the latest biochips, sensors and medical electronics can do when used outside the box. Fuse emotional content then abstract it. Stimulate imaginations.

Here are a few links from a Google search on "interactive art", "kinetic sculpture" and other combinations: 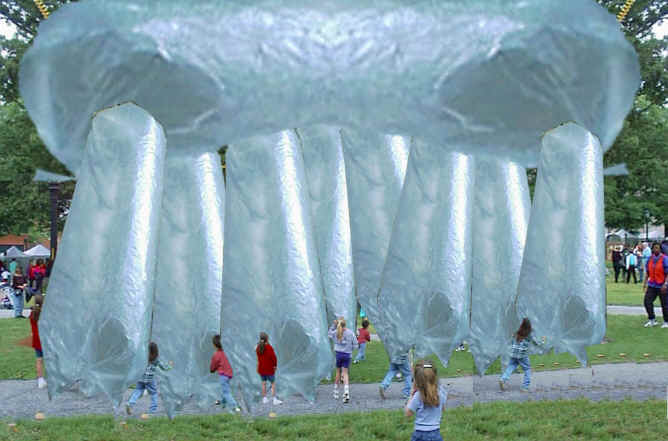 Settops like the Moxi deliver DTV,MPEG-4 or Web3D along with 5.1 channel sound. Authoring tools enable you to create video and multi-channel sound. But how about midi? Put a DVD in and run midi-controlled spotlights synched to sound and video. Midi-controlled, X-10-like devices might move, radiate, sense, or manipulate your environment in new ways. Plug and play.

You're walking amongst the lush, rolling green hills of Trossochs National Park in Scotland. Some strange fruit on the trunk of a tree catches your eye. It's not a nest, or a moss, but you realise, upon closer examination, that hanging on the side of the tree is a small, electronic handheld device. A pager. And flashing across the screen, like so much tree-carved graffiti dug into centuries-old stalks of bark, reads the words "Siobhán luvs Fiddian." And then you realise that this same message is being broadcast among thirty, perhaps fifty trees. The area you felt just moments ago was untouched by human hands is now in the midst of a wireless network.

You've been snared into the web of a wireless art installation, just one of many across the globe created by artistic thinkers who enjoy pushing the buttons of wireless technology and unpacking it, all in the name of art.

This piece called "4 luv" is the brainchild of artists Fiddian Warman and Siobhán Hapaska in Scotland. 4 luv plays on the age-old tradition of lovers carving their names into the side of a tree, with a modern twist. Warman is quick to point out that both tree etchings and SMS messaging, a technology all the rage in the United Kingdom, rely on a similar economy of text. And the piece highlights the permeation of the technology throughout modern culture, a sensation Warman describes as "freeing and empowering."

He explains, "I enjoy and work with the notion of digital technology mediating communications of a personal and quintessentially human nature." And, says Warman, it is the job of the artist, "to be at the cutting edge of technological development; informing its deployment, not following it." By working with the wireless format, the team feels they raise awareness of both the possibilities and the limitations of new devices, and that they force visitors to take notice of the technology, rather than simply take it for granted.

Taking it one step further, New York-based artist Ben Rubin says, "The artist's role is to misuse the technology and decide how its intended use can be twisted and perverted to its greatest extent."

Rubin's perversion was in an interactive exhibit at the Meat Market Art Fair in Manhattan last October. He had only ten days to prepare his contribution to the Creative Time Cellular Lounge, and in that time devised an auditory network piece called "917: A Code Without An Area." Visitors were handed a business card with instructions to dial a number on their cell phone. Rubin, collaborators, and visitors were suddenly on a conference call discussing local events and places.

But what the visitors didn't know is that nearly everyone they were talking to was in the same room, with some off-site collaborators equipped with maps and photos, pretending to be locals. The concept, says Rubin, "was to overlay this notion of shared group phone space which typically has no actual geographical component to it, onto a geographical place." Rubin wanted to toy with the first question for many wireless conversations, "Where are you?" He says, "We were trying to be playful and make people question a little bit. It was a hide and seek game. "Wireless technology creates a playground of great cultural and social issues, such as the notions of always-on, always-available with the 4 luv sculptural exhibit in Scotland, and the play with geography and place at the Meat Market in New York.

But another aspect of the wireless network, as examined by artists Jon Thomson and Alison Craighead in London, is that of sound. At their recent installation called "Telephony," visitors see a wall lined with 50 mobile phones, as well as a list of numbers they were instructed to dial. All of the phones were connected to a network, with each phone call forwarding the next. Every device was conditioned to play a few notes of the United Kingdom's most popular ringtone, then forwarded a call to trigger a few more notes to another phone, etc., with sometimes a single call eliciting a response from up to 20 phones. With multiple callers, the exhibit was a cacophonic orchestra and mobile of ring tones.